For International Women's Day we spoke with Associate Professor Abi Adams-Prassl to explore what led to her career in Economics, and what she thought could  be improved upon to welcome more women into the field of Economics.

What led you to a career in Economics?

As an undergraduate, I took a course on Public Economics at the same time as a philosophy module on theories of social justice. I was hooked. It opened my eyes to how economics can be used as a tool to tackle inequality in society. I was also incredibly lucky to have a brilliant mentor, Professor Ian Crawford, as a graduate student. I hadn’t seriously considered doing a PhD in Economics, and would not have done so, if it wasn’t for his encouragement and support.

Why aren’t there many women in the field of Economics?

This is a tough question. As surveyed in recent work by Professor Shelly Lundberg, there is a problem with female representation at every level of economics. The proportion of women in undergraduate economics courses has remained flat for 20 years. Only 16% of permanent academic posts in economics are held by women in the UK. This is not just because fewer women did PhDs in Economics in the past; rather it’s because women are more likely to drop out of a career in economics at each point of the professional ladder. While similar trends also appear in other STEM subjects, gender (and racial gaps) in economics are wider, and have narrowed less over time, than in many other fields.

Why? Some of it may be a feedback loop: a lack of female role models and visible faculty makes it harder to attract and retain female students and early career researchers. There is compelling evidence that having more visible female role-models helps to attract female students and improve their outcomes on economics programmes. However, there’s also evidence of bias in the profession. Women get less credit for work that is co-authored with men, are less likely to be invited to give seminars, and face a more hostile environment when they are invited. We have more and more evidence that seemingly gender-neutral institutional structures do not actually function in a gender neutral way in practise.

What motivates you in your work?

My work spans a number of topics in empirical microeconomics and also in public law and economics. A lot of the time, I want to better understand how markets function, especially for people on lower-incomes, and what this implies for the design of public policy. One particular interest has been on the changing world of work. Many aspects of “atypical” employment are poorly measured in traditional labour market surveys, which has held back our understanding of the potential impacts of, for example, regulations on zero-hours contracts and the broader gig economy. I’ve also been working on the impacts of the pandemic on inequality, and have been a Specialist Advisor to the UK Parliament Women and Equalities Select Committee on the gendered impacts of Covid. 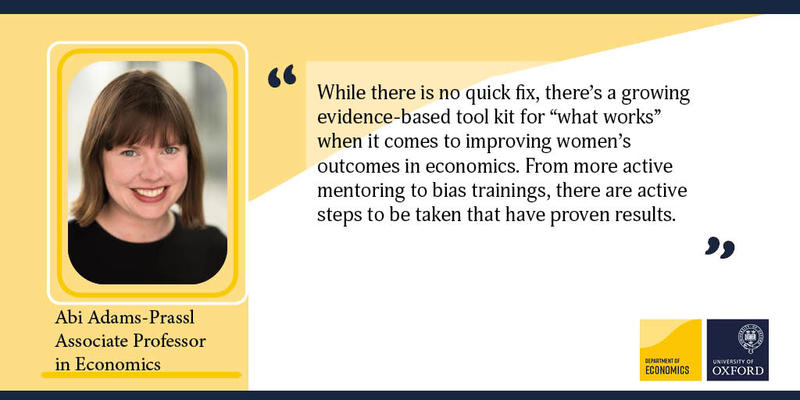 What do we need to change for women to take up space in the field of Economics?

While there is no quick fix, there’s a growing evidence-based tool kit for “what works” when it comes to improving women’s outcomes in economics. From more active mentoring to bias trainings, there are active steps to be taken that have proven results. I’ve been really pleased to see the Royal Economics Society’s Discover Economics campaign that is trying to tackle the lack of diversity in who takes economics at school and undergraduate level. Most importantly though, change requires a broad acknowledgment that there is a problem that needs addressing! It’s a huge relief to see that gender and racial gaps in the profession are now being much more widely discussed than a few years ago.

What women have inspired you and why?

Professor Rohini Pande at Yale, Professor Francesca Molinari at Cornell, and Professor Alessandra Voena at Stanford have all inspired me greatly. Despite not being at the same institution as any of them, they have given me so much advice, support, and time. I hope to pay the same forward to students and early career academics in the future! Dinah Rose QC, who I worked with on legal challenges to cuts to legal aid and the introduction of employment tribunal fees, has also had a big impact on my career and the type of work I hope to do in the future; she helped me understand how best to communicate statistics to people who aren't comfortable with numbers. Finally, and a bit cheesy perhaps, but I have also found Jacinda Arden's leadership style to be very inspiring: it is possible to be both powerful and empathetic.

MORE CONVERSATIONS WITH THE WOMEN OF ECONOMICS