ECONOMIC DYNAMICS IN THE MALTHUSIANERA: EVIDENCE FROM THE1609 SPANISH EXPULSION OF THE MORISCOS

We investigate economic dynamics in the Malthusian era using the 1609 expulsion of Moriscos from Spain. Sharp population declines in former-Morisco districts were accompanied by decreased output and increased per capita output. While these short-run results are consistent with standard Malthusian predictions, Malthusian convergence was delayed up to 1786 in former-Morisco districts. Archival sources and historical accounts suggest extractive institutions and cultural differences may have contributed to delayed convergence in population and output per capita. This historic episode provides an unusually rich setting to examine Malthusian dynamics, highlighting the potential for sustained differences in per capita output in the Malthusian era. 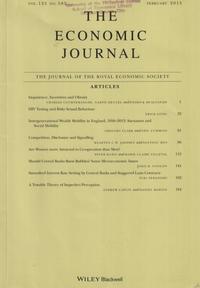